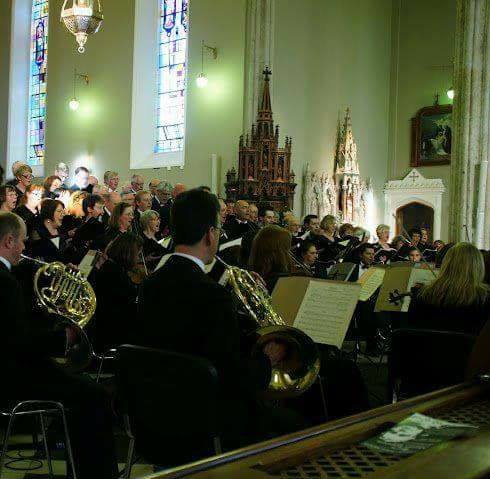 “In September 1965, a small group of people, who were interested in bringing classical music to the community of Carlow, got together to hear a recording of Handel ‘s ‘Messiah ‘.   At that meeting it was decided to form the Carlow Choral Union.   Under the influence of the Carlow Cathedral organist, Dr Karl Seeldrayers and a lecturer of music in Trinity College, Dublin, Dr Joseph Groocock, the new choir began rehearsals to sing ‘Messiah ‘ during the following spring and on March 29th 1966, its first performance took place, to acclaim, in St Dympna ‘s Hospital.   Since then, the choir has gone from strength to strength, benefiting     greatly     from     the input of a series of excellent musical directors.   A change of name to Carlow Choral Society came about in 1989.

Today the choir is composed of over 70  members (sopranos, altos, tenors and basses) who come from all over the Carlow itself and neighbouring counties.   Coming from many different backgrounds, they all share a common love of choral music and a commitment to performing to audiences, not only in Carlow, but throughout Ireland.     In addition, the choir has performed in various locations throughout the UK and Europe. To date, the Society ‘s repertoire includes some of the world ‘s most famous musical works €“ Bach ‘s, St Mathew ‘s Passion and St John ‘s Passion; Verdi ‘s, Mozart ‘s, Brahms ‘s and Faure ‘s ‘Requiem ‘; Haydn ‘s ‘Creation ‘ and ‘The Seasons ‘ and many more. In 2011, Carlow Choral Society recorded a Christmas CD which is on sale in during the Christmas period.