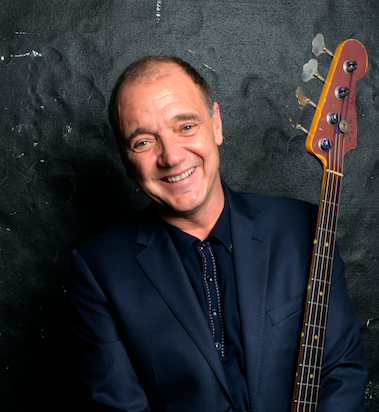 “Pink Floyd, Elton John, The Smiths, Madonna, Tom Jones, The Pretenders, Guy Pratt. It ‘s always the quiet one at the back near the drummer you need to keep your eye on..

Guy ‘s 30+ year career in music first took off when he was asked by Iva Davies to join Icehouse for a world tour at the tender age of 19 (which included supporting David Bowie on his legendary  Serious Moonlight tour of 1983.)

This led to him being spotted and used by the likes of Robert Palmer, Bryan Ferry, Womack & Womack and even The Smiths amongst others before being thrust into the global premier league of bassists when David Gilmour asked him to play for Pink Floyd.

After 13 months on the road he decamped to LA where he found himself in demand by artists such as Madonna, Michael Jackson and Robbie Robertson before heading off to play groundbreaking shows in Venice and Moscow with Floyd.

Since that time Guy has played on countless hit records for Sophie Ellis Baxtor, Iggy Pop, The Pretenders, Ronan Keating, Nathalie Imbruglia, and Elton John, just to name a few. He has also tried his hand at writing and producing, notching up hits with artists including Robert Palmer, The Orb, Fat Les, Jimmy Nail, Marianne Faithful and Debbie Harry. He has won a Grammy and been nominated for two Ivor Novello Awards.

Guy is also well known for his sense of humour and story-telling skills. In 2005 Guy took his first one man show,  My Bass and Other Animals, to the Edinburgh festival. The show gives an intriguing insight into the music industry and behind the scenes of touring and received rave reviews. His book of the same name was published in paper-back to critical and commercial acclaim, and is an hilarious must-read for any music lover.

In between tours, he ‘s written music scores for a swathe of award-winning documentaries, ad campaigns, TV shows and West End plays.