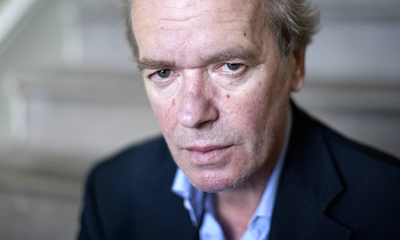 “Martin Amis  is a literary giant, a novelist and commentator of immense influence, who was born in Swansea.  Son of the novelist  Kingsley Amis, he graduated from Oxford, and worked as editor at the  Times Literary Supplement  and the  New Statesman.

Martin has been short-listed for the Booker Prize twice to date and has received the James Tait Black Memorial Prize. He is most well known for his novels  The Rachel Papers,  Money,  London Fields,  Pregnant Widow,  Lionel Asbo,  and most recently,  The Zone of Interest. Hi non-fiction works include  The Moronic Inferno  (1986) and  Visiting Mrs. Nabokov,  (1993), and    Experience  (2000).

He came to the Festival in  2013 with his wife Isabel Fonseca (They live in Brooklyn), and declared the Borris to be ‘the Tuscany of Ireland’. He returned again in 2016.”