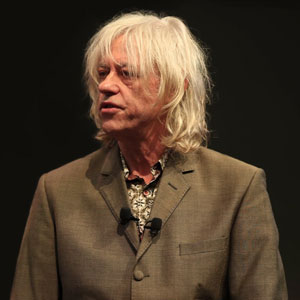 Born in 1951, Sir Bob Geldof is one of Ireland’s most successful exports and is known throughout the world for his many talents and passions. Starting his career as a successful musician, actor and songwriter, he has gone on to both inspire a generation and make prolific social changes as a philanthropist and political activist. An inspiring and influential public speaker, he speaks on a range of topics and uses his vast personal experiences to both provoke and motivate his audience.

Shooting to fame as the lead singer of the Boomtown Rats, Bob Geldof was a major player in the 70s punk rock movement and enjoyed over a decade of hits between 1975 and 1986. After leaving the band, he launched a successful solo career, published his best-selling autobiography, “Is That It?” and worked as a radio DJ, journalist and television presenter.

In 1984 Geldof was watching the news one night when he was horrified by a report on the famine in Ethiopia. As we all now know he got on the phone. The result was Live Aid - “the biggest and greatest event in pop history”. $200 million was raised for the starving and the dying in Ethiopia. Geldof established and continues to be the chairman of the Band Aid trust, which operates in eight African countries.

Bob Geldof has been nominated for the Nobel Peace Prize 8 times, more than any living nominee, and was honoured with a knighthood by HM Queen Elizabeth II; received the Nobel Man of Peace award from Mikhail Gorbachev; was awarded The North-South human rights award in Portugal; and awarded the medal of Chevalier de l'Ordre des Arts et des Lettres in France and received numerous TV and music awards as well as The Royal Society, Peabody and Royal Geographical Society awards.

Having reformed The Boomtown Rats they now have their first studio album since 1984 Citizens of Boomtown; a massive documentary about Bob and the history of the Rats and a new book Tales of Boomtown Glory was published in March 2020 - an anthology of the complete lyrics from Bob Geldof’s Boomtown Rats and solo albums, interwoven with Geldof’s witty, deeply felt and frank commentaries of the background, inspiration and context behind some of his songs.

Of himself, Bob says he is - a musician.