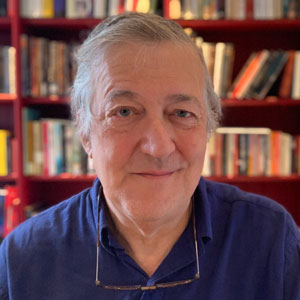 Whilst at university, Fry became involved with the Cambridge Footlights, where he met his long-time collaborator and friend Hugh Laurie. As half of the comic double act Fry and Laurie, he co-wrote and co-starred in A Bit of Fry & Laurie, and took the role of Jeeves (with Laurie playing Wooster) in Jeeves and Wooster.

Fry's acting roles include an award-winning performance as Oscar Wilde in the 1997 film Wilde, Melchett in the BBC television series Blackadder, Peter Kingdom in the television series Kingdom, Gordon Deitrich in the dystopian thriller V for Vendetta, Mycroft Holmes in Warner Brothers’ Sherlock Holmes: A Game of Shadows and The Master of Laketown in Peter Jackson’s Hobbit. He played a Georgian presidential candidate in HBO’s Veep and Roland in CBS’ series The Great Indoors. He has also written and presented several documentary series, including the Emmy Award-winning Stephen Fry: The Secret Life of the Manic Depressive, and was the long-time host of the BBC television quiz show QI. He played Prime Minister Alistair Davies in the 9th season of Fox TV’s 24: Live Another Day.

As a proudly out gay man, the award-winning Out There, documenting the lives of lesbian, bisexual gay and transgender people around the world is part of his thirty year advocacy of the rights of the LGBT community. He has been President of Mind, Britain’s largest mental health charity, since 2011 and an honorary fellow of the Royal College of Psychiatrists for over ten years.

As well as his work in television, Fry has contributed columns and articles for newspapers and magazines, appears frequently on radio, reads for voice-overs and has written three volumes of autobiography, Moab Is My Washpot, The Fry Chronicles and his latest, More Fool Me.

Fry has written four novels, The Liar, The Hippopotamus (made in to a feature film in 2018), Making History and The Stars’ Tennis Balls. Translated into many languages, they have never been out of print.

He has won many prizes for his performances as an audiobook narrator – of his own works and most notably as the voice of J. K. Rowling’s Harry Potter books.
His book on poetic form The Ode Less Travelled is widely used in schools and colleges as a guide to prosody.

The most recently published works are Mythos and Heroes, constituting the first two parts of what will be a trilogy retelling the Greeks myths from the Creation to the aftermath of the Trojan War. Troy will be published in November 2020.